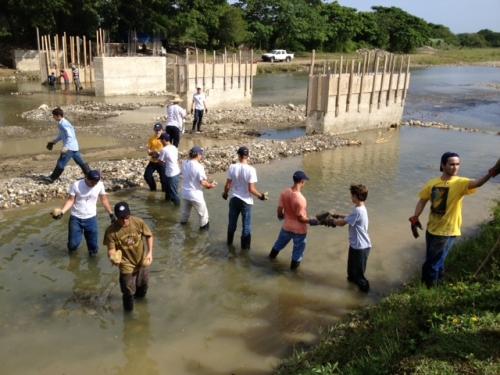 Students work diligently and hard to accomplish the construction of the bridge in this rural city.

Sixty-five students from Belen Jesuit joined alumni, students from Our Lady of Lourdes Academy and Carrolton School of the Sacred Heart, Jesuit Father Frank Permuy '85, engineers and medical staff on the annual Belen Youth Mission trip. In 2013 the group headed to La Piragua Abajo, Dominican Republic were they built a bridge and established a make shift clinic June 28- July 7.


The purpose of the 10-day mission was to serve the poor and deliver medicines, mostly vitamins and building tools used in the construction of the bridge. "I decided to go on this trip because I feel it's a good time to give back to other people,” said Steven Vega, alumnus from Class of 2013. “It's a satisfying feeling, and I'm living through the motto of my school, Belen Jesuit, which is living through others."


“Our school has supported such missions for over 30 years. It is one way in which Belen Jesuit fulfils its motto Forming men for others”, said Jesuit Father Pedro Suárez ’58, Belen President.

The registration are currently closed. Please contact the organizer for further information.